Overview of all of the things that make JABII safe to play.

The JABII has been playtested for safe strikes on all ages groups and has been proved to be 100% safe. The rubber front of the JABII acts like a reverse airbag that lets out air as it hits your opponent. This results in punches that you can feel, but which does not hurt.

Click the video below to see our impact test, where we compare a JABII with being hit by a boxing glove. 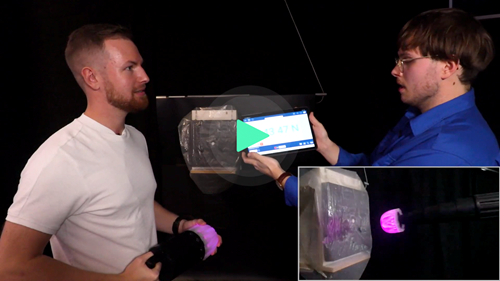 The 60 specially-made springs inside the JABII pull out the power of every punch, leaving a soft touch on impact.

As you can see in the cut-through photo below, the 60 specially-made springs inside is placed in every layer of the JABII.

The JABII App and referee

The built-in referee controls the match and rules, and communicates against illegal moves or activity through both the speaker and lights.

By communicating and instructing players, and taking away points from players who do not follow the rules, we are building a culture of fair fighters and matches through the same formula as traditional martial arts like Karate and Kung fu.

The sensors and on-board technology

The sensors and tech inside the JABII are what makes it possible to feed data to the built-in referee. Using the gyroscope, the JABII knows exactly at what angle it is heading, and when it is being punched at an angle that is registered as an illegal swing or punch.

The proximity sensors registers how far the JABII is stretched. The JABII must be extended for a minimum of 30 cm (1 foot) to count as a legal punch - otherwise the JABII will turn red and communicate an illegal punch to the player and referee.

We have built an IKEA-like stress-testing machine that tests the JABIIs resistance to wear and tear over time, which has resulted in a durable product that will not buckle under pressure.