Overview of the technical stuff inside your JABII.

The JABII is moulded in sturdy plastic parts and equipped with a series of mechanical springs. Inside you’ll find the brain; a small print circuit board with electronic components and sensors protected by a clear acrylic lens that focuses the LED lights for maximum power. The brain is protected by a rubber cushion pillow in the front and a built-in shock absorbing rubber element that reduces the recoil of each return from a hit that has allowed us to turn up the return speed of the springs. The product is finally mechanically locked together and sealed, so that no screws are necessary for the assembly.

The JABII App is available for smartphones on Google Play (Android) and App Store (iOS).

Two JABIIs can be used together with the JABII app on a smartphone, to play the App-Enhanced Battle. Using the JABII App, the users can record and replay the battles, gather match- and player-statistics and customise the JABII light colour.

Two JABIIs can be used together (without smartphone/app), to play the built-in Battle Mode (Stand Alone).

* Battery life depends on usage and which brand of batteries are used.

We've also tested the JABII for durability and among other tests run it over by a car. Click the video below to see the test. 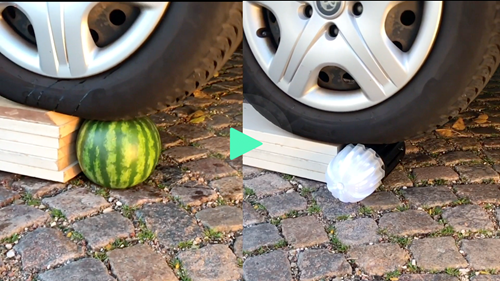